China’s game market has flourished in recent years and became one of the most lucrative across the globe. In 2019, China had an estimated 637 million mobile gamers and 321 million PC gamers, generating $33.1 billion in revenue.

However, the complicated regulations and requirements to publish games in China often frustrate developers:

In this article, we aim to provide you with a practical and up-to-date guide about launching your titles in China

The guide to publish your game in China officially

Section I: The guide to publishing your game in China officially

Cheat sheet:
1. To officially publish your game in China, you will need to follow the strict laws and regulations for game publishing. This includes making adjustments to comply with Chinese law (no blood and dead bodies, for example) and sending your game and code for review/censor.
2. It is necessary to partner with a Chinese publisher in order to get your game approved.
3. The game approval process may take six months or longer.

If you hope to launch your game in China officially, you will have to get it approved by the National Press and Publication Administration (NPPA) in China.

According to the guidelines from NPPA, foreign games must comply with the following requirements for game approval:

With all the required documents detailed above, you and your publisher are ready to do the paperwork and apply for the ISBN (International Standard Book Number) from NPPA. All games published in China must have an ISBN, for both domestic and overseas developers.

However, getting an ISBN is no easy task.

From March 2018, the SAPPRFT (State Administration of Press, Publication, Radio, Film, and Television), the predecessor of NPPA, suspended the game approval procedures for nearly nine months.

In December 2018, after the 9-month freeze, 80 domestic games got approved. However, in February 2019, NPPA announced that they would no longer accept new games for approval to clear the backlog. It has been speculated that at least 5,000 games were awaiting approval at that point.

Looking at the chart below, it is clear that the number of game approvals has dropped significantly, especially for foreign titles. Up to August 2020, 55 foreign games obtained ISBN. 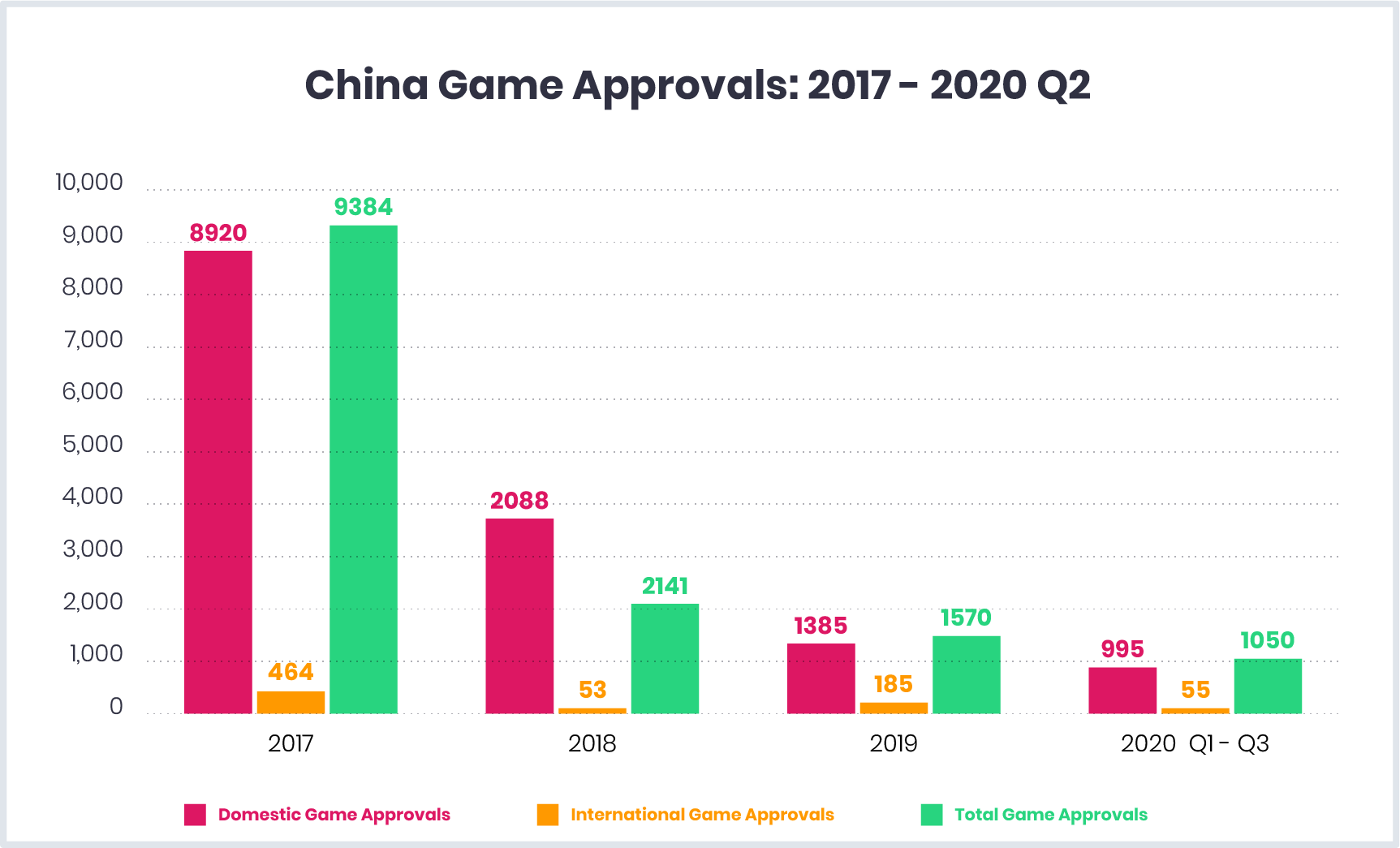 At this point, you may wonder, is there any workaround for the complicated game approval process in China?

The answer is yes!

Cheat sheet:
1. Steam is popular among Chinese gamers and has been operating in China without strict restrictions for years.
2. Mobile games are heavily censored and regulated. Free games without IAP (that monetize solely through ads) seem to be the best workaround at the moment.
3. China has a large grey market for console games, and you could launch your game for other stores (Asian stores are highly recommended) with excellent Chinese localization to reach Chinese gamers.

Unlike the Chinese PC gaming platforms (e.g., WeGame), Steam, owned by Valve, can operate without China's strict restrictions. Despite the blocking of Steam forums and pornographic games, it has operated in China smoothly for years.

With the pool of diverse and uncensored games, Steam has attracted many gamers from China. In the most recent Steam survey conducted in August 2020, it is reported that 19.41% of users use Simplified Chinese as their primary language. In 2018, it was estimated that there were over 30 million Steam players in China.

An approximate calculation by Niko Partners shows that Chinese gamers bought 15 million of PUBG via Steam. Grand Theft Auto V, a game that Chinese authorities would have been deemed violent, got more than 220,000 reviews in simplified Chinese.

In other words, you can publish your game on Steam without an ISBN, skipping the whole complicated game approval process, yet not missing out on the millions of gamers in the Chinese market. Steam offers the two most popular online payment options in China, WeChat Pay and Alipay, ensuring all Chinese player's accessibility.

That’s why during the 9-month game approval suspension in 2018, even Chinese developers flocked to Steam to publish their games. The Scroll of Taiwu, a Chinese indie game, launched in Early Access in September 2018, sold 2 million copies in its first year.

So, the ISBN problem is solved. What’s next?

Great localization is essential for bringing in Chinese gamers.

EF’s English Proficiency Index ranked China at Low Proficiency in 2018 and Moderate Proficiency in 2019. Even though there is an improvement in the proficiency level, it’s still difficult for most Chinese players to play the games in English or any other foreign language.

Browsing through the 100 top sellers on Steam, most of them have Chinese localization. Depending on game genre and budget, the extent of localization varies. For starters, you can begin with localizing the subtitles and game interface. If budgets allow, localizing your audio can provide an even more authentic gaming experience.

When localizing into Chinese, it’s crucial to find a trustworthy localization service provider. In-house native linguistics, experienced in game localization, and a well-established project management process are critical when looking to partner with a localization company. PTW opened its Shanghai Studio in 2002 and has been dedicated to providing high-quality localization services with local expertise ever since. To take your localization to the next level, PTW’s Localization Quality Assurance (LQA) services can help you with linguistic & cosmetic, cultural, and certification testing checks, protecting your game from cultural and linguistic oversights.

Our award-winning audio division SIDE also opened a state-of-art studio with professional recording and production facilities in Shanghai. With a well-established local network of actors, artists, and directors, SIDE are dedicated to creating an authentic and inspired vocal performance for your game. Regardless of your requirements and scale of your projects, PTW is the one-stop service provider to bring your game to Chinese gamers.

It is difficult to determine the survival of these foreign platforms in the long run. The Chinese company Perfect World has collaborated with Steam on a “Steam China” and the strict regulations may be enforced on Steam China like other Chinese platforms.

However, at present, Steam is still highly recommended if you hope to tap into the lucrative Chinese games market.

The wide adoption of smartphones contributed to the prosperity of the Chinese mobile gaming market. By 2019, the number of Chinese gamers reached 637 million and hasn't stopped.

The Android landscape in China is unique and complicated, and it is impractical to tackle Android stores without a Chinese partner. Additionally, these Chinese stores have been enforcing the game approval requirements included in Section I since 2016.

For iOS, a loophole has allowed developers to publish games without an ISBN on China’s App Store until earlier this year. In February 2020, Apple announced it would comply with Chinese law. Starting from 1st August 2020, they began removing all paid games or games with in-app purchases (IAP) from China’s App Store if the game does not have a valid ISBN.

Although it is required for all the games to have an ISBN to operate, the government focused on regulating paid games and free games with in-app purchases (IAP). The free games with no IAP that monetize solely through ads can still operate on the App Store and some Android stores in China. The ad-monetization model might limit the revenue potential and will not apply to every game. Still, it is currently a feasible workaround for the strictly censored mobile gaming market in China.

According to GameLook, H5 games have been operating in a grey zone, but as the cloud platforms are getting more popular, it is a matter of time before the fast-evolving regulations will close this loophole.

After over a decade of console ban, China finally allowed the production and sales of game consoles in 2015.

Estimates state that in 2019 Chinese console gamers reached 11 million. Among the console sales in 2019, 1,140,000 consoles were sold through the grey market, comparing to 460,000 legal ones. The grey market refers to consoles designated for markets other than China that are sold in China. The strict restrictions in China led to the flourishing grey market, where the Chinese gamers can enjoy a much larger pool of games, comparing to the limited legal ones approved by the authorities.

According to Niko Partner's analysis, PlayStation 4 is currently leading in the console market, but with Nintendo Switch's fast-growing sales, it is very likely to surpass PS4.

To publish your game on legal consoles, the requirements and procedures are the same as the other platforms mentioned in Section I. This can be a challenge even for gaming giants like Tencent. When launching the Chinese version of the Nintendo Switch last December, it had only one game approved by NAPP, New Super Mario Bros U Deluxe. It was not until this March that Tencent got approvals for two other games.

Chinese gamers welcome the grey market due to the accessibility of unapproved games and hardware that are not sold in China yet. This is an opportunity for overseas developers to market their games and reach out to the massive gaming population, without the complicated game approval process.

The fundamental problem seems to be solved, but it shouldn't be taken for granted that your game will automatically be a success with Chinese gamers. High-quality localization is your gateway to this lucrative market, and local experts like PTW Shanghai can help you with translation, culturalization, localization, and linguistic testing. With a first-submission pass rate of 100%, PTW is a trustworthy partner that can help you pass your certification testing. 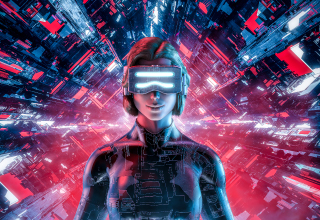 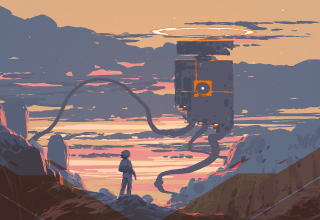 So You Want to Port Your Game? 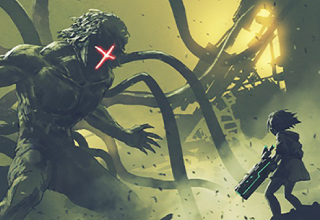